A Weekend in Old Delhi

You are here:
Travel

Forget Shah Jehan and the Mughals, I told myself firmly as I threaded my way through the meat market, in the shadow of the Jama 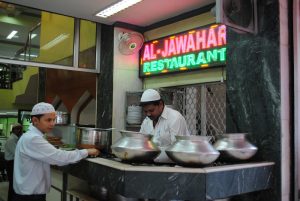 Masjid. The Mughal emperor with the most developed aesthetic sense for architecture and jewellery may have been the raison d’etre for much of Old Delhi, certainly for the giant quadrangle between Jama Masjid and the Red Fort, but don’t try looking for him today – he’s packed up and left.

You don’t just walk through the meat market  – you gingerly wade over piles of decaying offal and avert your eyes at the sight of mounds of sheep’s heads, waiting to be sold to the gastronome on a budget. If you can stand ankle deep in melting ice, swirling blood and caking mud and still not lose your appetite, here’s where you’ll get men selling small clay dishes of rice pudding, delicately flavoured by the earthenware containers. Urdu Bazar as the area is known, has metamorphosed into innumerable stalls selling fried chicken, fried fish and skewered beef. Backward integration at its most efficient.

Matia Mahal, the road south of Jama Masjid, is lined with rough-and-ready eateries, of which the most famous is Karim’s. The others – Jawahar, Subhanallah and the rest, many of which aren’t dignified with so much as a name – don’t seem to draw much of a crowd. Karim’s, whose quality seems to be slipping steadily, is the only one of the non-vegetarian joints in the area to serve lamb, not beef.

I’m glad I strayed into a nondescript side lane leading west from Matia Mahal, because what I took to be a sunless, largely residential alleyway, turned out to be Churiwalan, the nerve center of the Muslim quarter. The road is too narrow to admit more than two cycle rickshaws abreast, with enough twists and turns to give a python a complex. Mosques, bakeries selling all manner of puff pastry, letterset printers, shops crammed to capacity with doors yanked off cars (one shop was proudly called Maruti body parts) – Churiwalan has enough hakims and vestiges of old architecture to give it character. 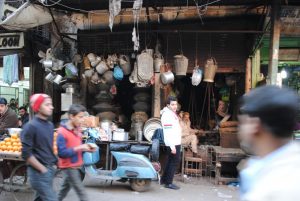 I was actually in search of Seema Hotel, touted to be one of the most spacious hotels in Old Delhi. But if that conjures up visions of brickwork walls and arched niches, rein your imagination in: it has the same uninspired modernization that has cropped all over Shahjehanabad like a case of measles. “But Old Delhi is old,” said Sheikh Irfan with a touch of petulance when I expressed dismay at the pink and blue tiles in the box-like bedroom. “We don’t have to struggle to make it look old,” said the descendant of generations of hakims turned hotelier.

Jama Masjid is hemmed in on three sides by rows of hotels of varying degrees of dinginess. Taj Hotel (no relation, however distant, to the well-known chain) with its electric green neon lights, Mirza Guest House in a deliciously shadowy alley-way,

hotels that line Church Mission Road perpendicular to the Old Delhi Railway Station and those that crowd the alleyways of Gali Qasim Jan in Ballimaran, all have one thing in common: cupboard-like proportions and relentless “westernization.”  About the only hotel with plenty of character is Crown in Fatehpuri, one of the rare buildings that was built as a hotel: most of the others are converted havelis.

Don’t even think of trying to see the whole of Old Delhi in one weekend. You’ll need at least a month. Neither are the cycle rickshaws much help. You can’t wander up to one and say, for example, “Take me to all the sights that are worth visiting in the neighbourhood.” You won’t get very far, though INTACH should 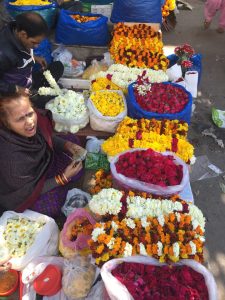 seriously consider the possibility of training cycle rickshaw pullers as guides, the way they are in the bird sanctuary at Bharatpur. The best you can do is to zero in on specific areas of your interest and explore them in some detail.

Hard as it is to believe, amidst the constant din of Chandni Chowk and Jama Masjid, there are areas that are sudden pools of silence. The most dramatic of these is at the Jain Swetambara temple at Kinari Bazar, off Dariba Kalan which is famous for its jewelers shops, is best visited after dark, because the glitter of the wedding tinsel sold in the dozens of shops there shows off to best advantage by artificial light. In contrast, the Jain temple is at the end of a small cul de sac, perfectly maintained because it is completely residential. Jain families – very possibly the descendants of the original owners – still live in the double row of ornately carved mansions. What caught my eye was the rare sight of carefully tended potted plants, lush and green in the surroundings.

The temple itself is in the care of a garrulous old pujari who speaks enough English to make himself understood. Swetambara Jain temples have marble idols of the tirthankars (apostles) 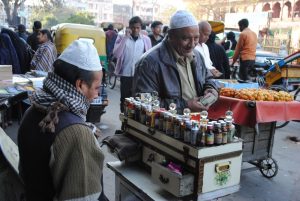 with glued on glass eyes, giving them a startling look. This little temple has a wealth of wall paintings, obviously executed over many centuries. Don’t miss the top floor: it has bright glass mosaic collages of the entire life of Lord Mahavira, the 24th and last apostle, and founder of Jainism. The pujari, whose father was the pujari of the same temple, knows the names and locations of the numerous Jain temples that dot the area. I would have liked to visit a few more, except that the more I saw of Old Delhi, the more it occurred to me that more time was needed for even a cursory visit.

Blundering into the Chunna Mal haveli was a stroke of luck. It’s not far from the Town Hall, on Chandni Chowk, once upon a time the most prized piece of real

estate in North India. Anil Pershad, whose family has been living there for seven generations, is obviously proud of his ancestral heritage, and has stayed on, despite pressures to move: close relatives who occupied neighbouring sections of the first floor haveli have fled to the tonier environs of south Delhi. They were reportedly tired of never being visited by friends, because of where they lived. There is no reason to believe that Chunna Mal haveli is different from the other houses of the period: a huge formal drawing room overlooks the road; on the other side of the central courtyard are a warren of tiny, cramped rooms. It is difficult to believe that the imposing formality of the drawing room with its Italian lamps and imposing proportions is a part of the same dwelling as the living quarters at the back.

Just how much of a difference careful preservation makes, can be seen from Gadodia Market, a mere one kilometer down from the Chunna Mal haveli. Right in the middle of Khari Baoli (don’t expect to see a well with brackish water – like many other things in the area, this one’s only a name) is a three storied building with a huge central courtyard. With the same intricate grills as other buildings of the period, it would have been the showpiece of the locality, except that it is now

used as a wholesale spice market. There were coolies laden with huge sacks of red chillies or turmeric on their backs and a strictly business-only atmosphere. Judging by the clothes that hung on upstairs balconies, Gadodia Market doubles as a hostel for coolies, besides being a frenetically active market during the day.

Manisha Sahai of Crown Hotel feels that Old Delhi has been relevant for a continuous period of 400 years. “Every few decades, another layer is added to the market, which is what gives it its richness.” From silver warq as a topping for mithai to car horns – the total range of products – and the time span that separates them – are mind-boggling. Sahai feels that the end of the relevance of the markets of Old Delhi just may be in sight. Rooms in Crown Hotel – as indeed the other hotels in the area – are booked by dry fruit dealers for a few days during the festival season. Not for people to stay in though, but for hundreds of boxes of dry fruit that can’t be cramped into godowns. According to Sahai, during the last season, many dealers suffered losses: the first time in history. “It’s too messy to get into the area; it’s far more expeditious to buy the same dry fruits in New Delhi, marked up price notwithstanding.”

Admittedly you do have to have nerves of steel to brave the noise and dust of Old Delhi. But you can escape it altogether. As Sheikh Irfan of Seema Hotel says, “This part of the city is not polluted at all,” a statement he appears to believe! “None of the small lanes can admit traffic, only cycle rickshaws, so where’s the pollution?” And when I climbed up the minaret of Jama Masjid and reached half-way to heaven, the striped onion domes below me and flat-roofed houses as far as the eye could stretch, I was inclined to agree with him.