From nawabi to five star kitchens, the king of meats has come a long way. Now chefs and hotel consultants are uncovering recipes lost for centuries, including many from the royal kitchens of the Mughals, giving King Kebabs  a new lease of life. Most people read The Mahabharata for ancient wisdom. When Salma Hussain reads the age-old text, she uncovers recipes for kebabs. Kunduazizi, according to her research, is a kebab which predates the Mughal period by millennia. Its recipe? The meat of a fowl, citrus fruit for marinade, crushed black pepper for seasoning, and spit grilling as its method of cooking. Kebabs—a Persian word meaning grilled meat—have been around for so long, that it’s virtually impossible, or unnecessary, to invent new varieties. So, chefs and food experts have gone looking for lost treasures. Welcomgroup ITC hotels recently conducted a painstaking process whereby chefs and food researchers uncovered many long-lost varieties. Salma Hussain, Persian scholar, food researcher and consultant to the Welcomgroup delved into Persian manuscripts like Tuzuk-e-Jehangiri and Alwan-e-Nemat, for references. Both manuscripts date to the time of Emperor Jehangir. The process took years to complete, and yielded close to 200 varieties of kebabs that eschew the clichés of kakori, gilavati and shikampuri, meant for inclusion in the master recipe list of the group.

Other kebabs prepared in the Mughal kitchens include tikka Humayuni, thin strips of lamb washed in yogurt, kachri and nausader, mixed with dried fig paste and grilled. Kachri, a tangerine-sized melon that grows in Rajasthan, is used as a souring agent in this case. Nausader is one of the half dozen or so types of salt used in speciality Indian cooking, others being sea, rock, black and sendha namak.

Spit roasting meats may be one of man’s earliest experiments with cooking, but the advent of the Mughals into India, and their interaction with Unani doctors brought the kebab into the realm of art and medicine. The royal cooks, many of Persian descent, created recipes, but it was the Unani physician who fine-tuned them into cholesterol-friendly morsels. Which is why the Mughal emperors would be pained at what passes today for Mughlai food. Salma Hussain’s other notable contribution to the cache of kebabs is the gurakh. First, finely minced lamb is sautéed with onions. A live coal placed in a bowl is drizzled with clarified butter so that it releases aromatic smoke. This is placed in the vessel containing the mince and quickly scalded. The mince thus takes on a smoky aroma. After it is stuffed into a piece of de-boned chicken, it is cooked on a bed of cinnamon. The resultant kebab thus contains a hint of smoked mince and cinnamon-infused chicken.

Kunwar Rani Kulsum Begum of Hyderabad remembers family weddings of up to two decades ago. That’s when the mo’alla kebab used to be made. The speciality cooks who would take over the vast family kitchen (she’s a descendant of the Salar Jung family) formed a loose hierarchy, at the very top of which were the mo’alla cooks. They would cook vast quantities of spiced ground lamb, and encase specially prepared biryani in layers of the lamb. Typically, only one mo’alla kebab was prepared for a wedding, and it was so large that it could feed the entire neighbourhood. This gargantuan sphere was tipped into a vast kadhai and fried all over, before being covered with gold leaf.

Today, not only are there no cooks left in Hyderabad who can turn out this king of kebabs; even the makers of the special vessel have long given up the ghost. Kulsum Begum herself now makes much more modest-sized mo’alla kebabs for delighted guests of the Welcomgroup. Her other kebabs include the angara that calls for minced lamb that has been ‘massaged’ for maximum tenderness. It is wrapped around a chilli that is stuffed with a tangy tamarind chutney and deep fried. The angara is symbolic of the Hyderabadi’s preference for meat that uses a souring agent. In traditional Unani wisdom, as this has a cooling effect on the system.

Yusuf Masihuddin Tucy traces his antecedents to Bahadur Shah Zafar, the last of the Mughals. Tucy’s research into the cuisine of his forefathers led him to discover a wealth of seldom heard of herbs like powdered sandalwood, khas root, rose petals, phool makani, dariya kuf and gul-e-sang. His Kebab-e-Ferghana is marinated with red wine and a judicious combination of salts: good for both palate and health.

Not all kebabs are for the carnivore. The vegetarian master-list includes those made variously of fried mangodis which are crumbled before being mixed with spicy seasoning and soaked fenugreek seeds that are combined with mashed potato and formed into patties.

Manjit Gill, Corporate Chef, Welcomgroup ITC Hotels, whose brainchild the entire exercise was, likens a chef to a detective, an alchemist, a scientist and an inventor. “You can be prowling junk shops and road-side stalls selling second-hand books when you come across a treasure trove.” Gill’s theory is that a recipe, however detailed, is but an outline. How faithfully you follow it depends on your skill at reading between the lines. “We have recipes for kebabs that use sweet ittar in them. Use one drop more than you should, and you’ll have a disaster on your hands. 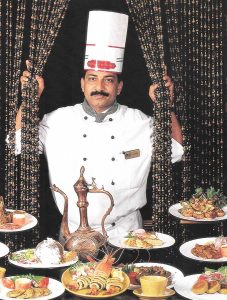 One of his favourite recipes, the khad ka pinda, was doomed to certain extinction by virtue of its impossibly complicated method. A whole leg of lamb has to be marinated, wrapped with half cooked chapattis, bound in jute, and cooked in a pit, topped generously with branches of keekar. “It’s only a deluxe hotel that can afford such time-consuming research, not to speak of onerous preparation methods,” says Gill, acknowledging that the whole exercise has been a personal fulfilment.

Some of the extraordinary kebabs that the chain now serves are the murg ganna gandani kebab that features chicken mince in combination with fresh sugarcane juice. It’s shaped like a stick of sugarcane to boot. The dareyaee kebab calls for minced lamb to be flavoured variously with spinach, beetroot, saffron and cheese. Each skewer is threaded with sections of the various colours, giving it the appearance of waves. Ajmaisha amshala are escallopes of lamb filled with almonds, pistachios, raisins and cream which are then cooked in milk that has been flavoured with fennel, bay leaf, clove, cinnamon, black pepper, black cardamom. Finally, they are drizzled over with clarified butter and grilled.

And if you are weary of kebabs that call for north Indian spices, Thanjavur has thrown up a secret after more than a century: kebabs that hark back to the 16th century when Shivaji overthrew the Naiks of that city. There are at least a dozen of them, all with a distinctive South Indian flavour. The sandhya kebab, is uniquely formed into a lime-sized ball and tied with a banana string before being deep fried.