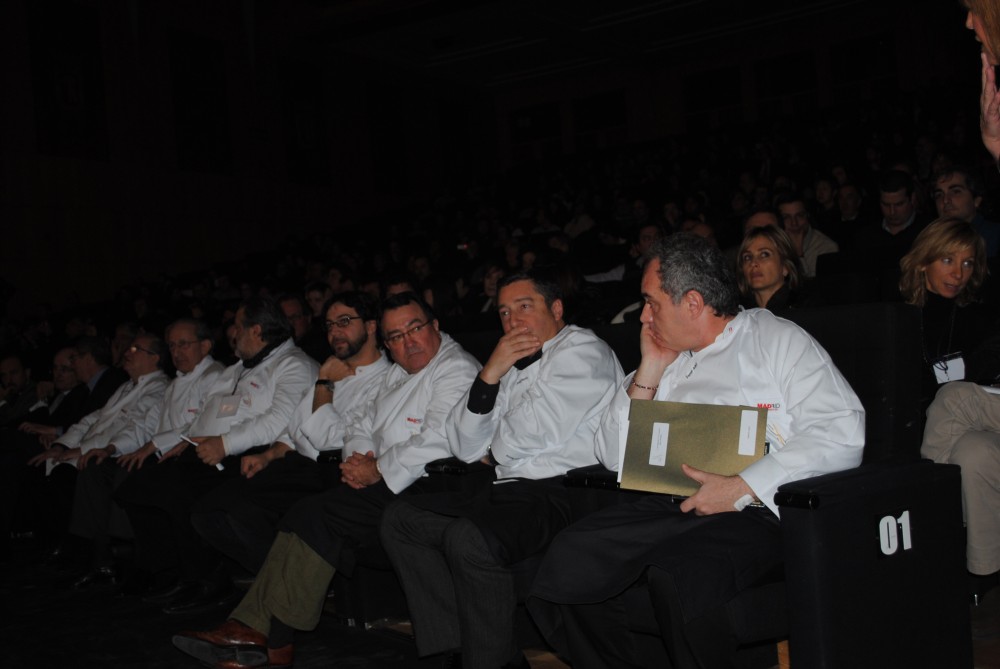 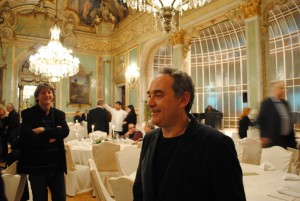 You see, that was the day that Chef Ferran Adria announced at a press conference that he was going to close El Bulli for two years. I don’t think I’ll forget the flash of lightning that was almost tangible in the auditorium. The uproar that ensued was like a clap of thunder. The very fact that Adria, who enjoys a near-divine status in Spain, chose Madrid Fusion to make his announcement, shows how pre-eminent Madrid Fusion is, in the Spanish scheme of things.

In many parts of the world, food shows that are now prominent, started out as the personal dream of a single individual. Chef Peter Knipp, the erstwhile chef of The Raffles, Singapore, started a modest-sized kitchen equipment exhibition that has, several years later, metamorphosed into the Singapore Gourmet Summit that attracts guests chef from all parts of the western world. It’s the same with the now world-famous Madrid Fusion. Started by brother and sister Jose Carlos and Esmeralda Capel, it contains, in its present form, several elements that go on simultaneously: wine tastings, demonstrations by chefs, panel discussions and exhibitions of ingredients. All of them are completely unmissable and the biggest problem is poring over the day’s programme at 10 every morning and deciding what to see and what to leave out.

I was one among a flock of writers and food and wine impresarios from all over the world who had been invited for Madrid Fusion by the Spanish Institute for Foreign Trade. We seldom got to meet each other during the day because each of us had differing areas of interest. In the evenings however, a coach took all of us to the centre of town where we bonded over dinner. It was during these times that each of us heard from the others, about what we had missed. 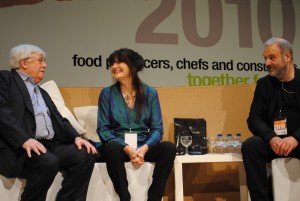 Two of the biggest stars among the invitees were Ruth Reichl and Jeffrey Steingarten, both food writers from the United States. They were part of a panel discussion on Day One about the future of food writing. Each of the participants, that included Nick Landers, had their own views, which they put forth with a great deal of vehemence, but every one of them agreed that food blogging by amateurs, some with their own agendas, was not the way forward. After the discussion, I met Reichl and we chatted about food magazines. As the last editor of the famous, now defunct Gourmet, she was interested to know how successful and influential Upper Crust is!

The discussion at Madrid Fusion hinged on the fact that food writing equaled restaurant reviewing, but Reichl’s own perception is that there are other, more important stories that need to be done in the interests of public awareness.

Other luminaries from the world of gastronomy who took part in panel discussions included Alain Ducasse. He confessed that he was now effectively out of the kitchen and into school: cooking school, where instead of training a dozen chefs, he was training hundreds of students. Then, there was an auction of two fist-sized black truffles. The proceeds were going to charity but what made the biggest impression on me was how casually the Spanish passed along the giant fungi from hand to hand. There was none of the French reverence for the ingredients that were bought by a restaurateur who immediately became a celebrity. 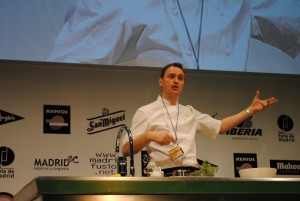 Jason Atherton of Maze in London was one of the few participants on the dais who actually spoke English: on all three days, the main language was Spanish; those of us who couldn’t understand were given headphones with simultaneous interpretation. Atherton was one of the few chefs who did not content himself with doing a cooking demonstration alone, but told the audience how he had planned the kitchen at Maze. One point that struck me was that while other chefs have suppliers, Atherton has foragers. These are people that actually go to marshlands and forests, looking for ferns and herbs that only grow in the wild.

Atherton proudly described himself as from the Mafia: the London gastronomic equivalent of being a Gordon Ramsay protégé! He proclaimed the superiority of British ingredients, but confessed that his inspiration came from all over the world. And that was the hallmark of Madrid Fusion 2010: the world has shrunk to the size of a single plate: all that was on it could have come from anywhere. Thus, Chef Thierry Marx did his demonstration using chopsticks. He did this completely un-self consciously. His compatriot Michel Troisgros did the most highly acclaimed of all the cooking demonstrations that involved pressing a layer of caviar into a thin, nori-like sheet and then wrapping it around endives. For each of the demonstrations and talks, a troupe of Spain’s best known chefs would wander in and out of the auditorium, where the first row of seats was reserved for them. On the first day, the glare of flash-bulbs virtually lit up the huge auditorium every few seconds. By the second day, the press became used to the fact that the chefs, well-known as they are, were part of the décor. By the third day, only Juan Mari and Elena Arzak – the father and daughter combine of the eponymous restaurant drew a few photographs during their press conference.

Upstairs on the 3rd floor was the exhibition. The vast majority of stalls were Spanish. Iberian ham, Serrano ham and Pata Negra ham was being showcased by dozens of stalls, each with a uniformed chef carving paper-thin slices for the visitors whose hunger never seemed to diminish. One of the “hams” was made of cured beef from the Asturias region in the extreme north of the country. The finest cheese on display was undoubtedly Torta del Casar, a soft, meltingly creamy cheese with a mildly bitter, herby flavour that comes from the region of Extremadura. There were products from the island of Tenerife, from the Basque region in the extreme east of Spain and from the southern province of Andalusia, where the majority of the olive oil comes from. 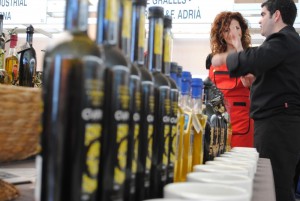 Spanish olive oil, generally considered to be among the finest in the world, lays great emphasis on single olive varietals. All the top brands on display at Madrid Fusion were made from one type of olive only, and like the best wines, the region as well as the varietal was advertised on the label.

Lunch times were when the presentations and talks came to a halt and the serious business of eating took over. The press room became jam-packed with people positioned strategically near the kitchen door, waiting to snaffle the tiny plates of delicious morsels that came out. In Spain, snacking on tapas is a way of life: the Spanish manage to fill themselves up but never give the impression that they are reaching out for the food. For the overseas visitors, it was quite a difficult task managing sustenance and being nonchalant simultaneously.

The dinners had been planned to provide as much variety as possible. The first night was the gala dinner in the gorgeous premises of the Casino de Madrid, where the catering is famously looked after by none other Ferran Adria. The next night we were taken to the historic Mercado de San Miguel where chefs who have been inspired by Adria prepared tapas for us at live counters. It was the third night that we were taken on a tapas crawl of the city, to four different tapas bars, each with its own style and level of sophistication.

The downside to my trip to Madrid is that since then, nothing I have eaten has quite measured up to the Spanish vegetables and fruits that I took for granted for three days. Or the olive oil, or the meats, or the seafood, or the cheese, or the….